What is water? Well it is H20: â€˜ hydrogen two parts, oxygen one, but there is also a third thing that makes water and nobody knows what that is!Â This is a quote from D.H. Lawrence and a thought which we should dwell on... Water is a philosophy, a culture and the one essential to all life. What is water for Turkey....It is the Tigris, the Euphrates and it is a bathing culture inheritied from the Romans... the Hamam... which cleanses you in and out.

Actually your first thought when you arrive is probably to buy a bottle of water...even before you are thirsty. And the last thing to do before you go home should be to experience a Turkish Bath and return home pristine clean. So for the uninitiated WHAT IS A TURKISH BATH?

It is the one thing to make you clean Turkish style.....plus some olive oil soap of course.
The Bath is a building with a heated marbled floor and a domed ceiling, which helps to circulate the steam formed by pouring water onto marble slabs. The all-important human element is the Hamamciâ€¦ the masseur.

The Hamam is traditionally a rectangular building with one or more domes pierced by rounded ceiling lattices through which filters light to iluminate the interior. Thus no windows for peeping toms! The interior is a completion of circles; round domed room, rounded seating area around round basins with a centralized round massage slab...all in marble and heated by water piped round the system.

HERE IS THE PROCEDURE!

You are welcomed into the warm reception area and allotted a safe-box to store your gear. Stow away you clothes and put on your bathers. If you were in a typical Anatolian Hamam you would strip off and just tie a â€˜peshtemalâ€˜ around you. In touristic areas bathing is mixed and no-one strips completely! The Hamamci supplies you with â€˜peshtemalâ€™ anyway and â€˜takunyaâ€™. You now enter the Hamam. Through the steam you see people sitting, standing, recliningâ€¦ and even some naughty ones throwing water in all directionsâ€¦foreigners of course!

You seat yourself in one of the alcoves beside a marble basin and pour warm or hot water over yourself with a Hamam Tas. This softens your skin in preparation for the Hamamci. He is a fine figure of a man. He spends the whole day in nothing but a a peshtemal developing his muscles as he works on his clients. He also tends to have a good paunch and sometimes a moustache!

He is a connoisseur. For him you are an interesting piece of anatomy, which needs to be cleansed and relaxedâ€¦no ulterior motive.

He stands at Gobek Tashiâ€¦ a round heated marble daise in the centre of the Hamam. Sign language is somehow preferable to speech as humidity seems to muffle sound. He motions you to approach the Gobek Tashi, and pours water over you, bowl after bowl. Then he lies you down and dons his mittenâ€¦ sometimes made of silk. He rubs the mitten back and forth over your bodyâ€¦ literally rolling off your outer layer of skin. You are surprised how much useless dead skin you possess, and the replacement beneath it is still bronzed! This complete, the time has come for a good soaping. It is so enjoyable. A bubbly session without the bath. You disappear beneath a mound of Olive-oil soap suds. You are so relaxed it is difficult to stay awake for the next piece of action... an all-embracing massage. The Hamamci ripples his hands through your body concentrating on any problem areas as you lie extended on the slab in a reverie of solitary relaxation unaware of nothing but the present moment. But suddenly it is all over. You sit up and the soap is washed away.

YOUR BODY IS YOUR OWN AGAIN. Using your own shampoo you wash your hair and the Hamamci rolls you up in a series of soft towelsâ€¦two for the body and a turban for the head. The bath is overâ€¦ and you are seated in the reception area surrounded by other be-towelled bodies holding a welcome glass of tea. What a treat it has been.

THE 19th CENTURY HAMAM CULTURE IN ENGLAND
Yes, In Britain the Turkish bath was very popular during the Victorian era as was Backgammon. It was a bit more sophisticated. You first perspired in a dry room where you could read or play cards before moving to the humid salon. The whole day was spent at the baths ending in a dip an icy pool. Pores sealed up you retired to a private cubicle where a little woman in black with a frilly apron would appear with a menuâ€¦poached eggs etc.!

HOW THE TRADITION STARTED IN TURKEY Following the capture of Constantinople the Ottomans continued to use the Roman Thermae. By the middle of the 16th century the Sultanâ€™s family were patrons ordering the construction of public buildings such as baths, poor houses, schools and community centres... under the direction of the great Ottoman architect Mimar Sinan(1489â€“1588) a Christian from the Caesarea(Kayseri). If you are in Istanbul visit the historical baths of CemberlitaÅŸ or Suleymaniye. They are still in useâ€¦a good way to spend a day especially after over-indulging the previous evening.

Like its Roman predecessor a typical hamam consisted of three basic, interconnecting rooms, the Caldarium (sicaklik), the Tepidarium and the Frigidarium (â€˜soguklukâ€™). Traditionally, the masseurs in the baths (tellak in Turkish), were young men who were recruited from among the Empireâ€™s non-moslem subjects as such work was seen as beneath the dignity of a Muslim! Somewhat different was the Sultanâ€™s hamam in the Haremâ€¦ No males entered except for the Eunuchs. The â€˜odalisquesâ€™ were trained so that if one day they caught the eye of the Sultan they would know how to pleasure himâ€¦always with a chance of producing a male heir. However there were so many young beauties that few ever found the famous bed. The Hamam was for them a place to meet, preen, eat sweetmeats and gossipâ€¦

GLOSSARY:
PeÅŸtemalâ€¦ a special colourful wrap woven of silk or cotton which is wound round the body Nalin/Takunya... originally a highly decorated sandal with a raised wooden foot-base and overstrap Haman Tasâ€¦ a shallow bowl made of tinned beaten copper with which one scoops out the hot water Keseâ€¦ a silk mitten for exfoliation
Odalisque... one of the young girls chosen (generally stolen), to join the Sultanâ€™s harem

Hereâ€™s a quote from the historian Bernard Lewis:
â€˜A whole social system revolved around the Turkish baths. The Hamams became an institution around which every important milestone in an individual`s life centered. The 40-day-old baby was taken to the Hamam for his ritual first bath, the bride bathed on her wedding day complete with music and rejoicing, grooms too visited the Hamams. Even an Avowal bath was customary. This is the bathing, which follows a promise made on a wish being fulfilled. There were baths for circumcision.
The bathing itself was an elaborate process involving various equipments and procedures. There were separate bathing hours for men and women. Turkish women specially, being generally confined indoors, looked forward to a trip to the hamam. There were about 15 to 20 articles needed for a traditional Turkish Bath. These were carried in a bundle, which was ornamentally decorated. Apart from the pestemal and takunya ther was a soap case made of metal with a handle on top and perforated at the bottom,a a `kese,` and a soaping web made of plant fibers .Other items carried in the bundle included three towels for drying, a mirror and a jewel box where the ornaments would be kept while she bathed. Her cosmetics kit included a bowl of henna for her hair, an eyebrow darkener which was mashed with a small copper bowl and another box containing `surma` for lining her eyes, and finally "attar" - rose perfume in a bottle. The woman would sit on a carpet laid on the floor to undress before going to the Hamam. The bride`s bath required special costumes to be worn, which generally came from the groom`s house. On her way to the ceremonial bath, she wore a pair of loose trousers or shalvar and a vest. She was also dressed in a kimono type of robe. Wearing this, she would sit on a throne in the tepidarium. A lady playing the tambourine would lead the way followed by the bride and her contingent, singing a festive song. . 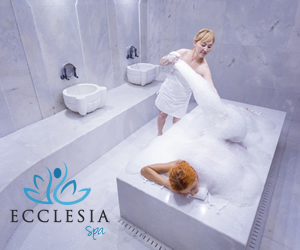